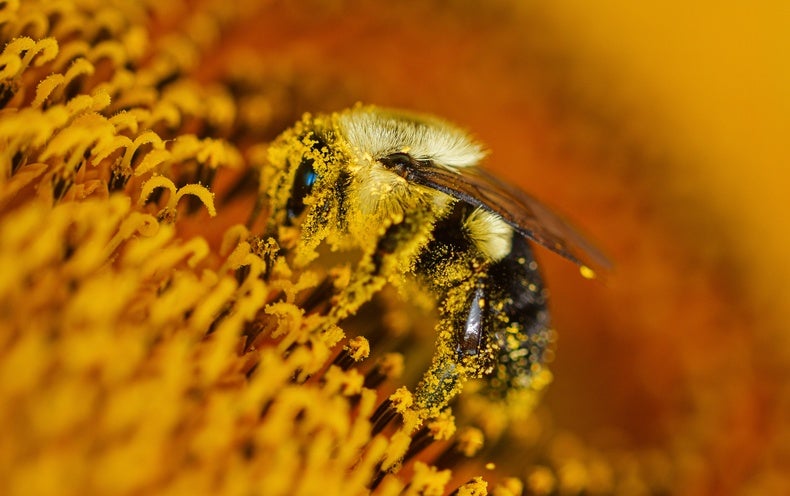 When you hear the hum of a bee visiting a flower, you hear the movement of air created by the flapping of its wings. But it turns out that bees buzz in more ways than one.

I first saw this when a bee landed on the electrode I was using and saw a real change in the measurement. And I thought, “This is a rechargeable thing.

Giles Harrison is a professor of atmospheric physics at the University of Reading, England. He is one of the authors of a recent article in iScience who measured the electrical charge of a swarm of bees and found that the insects could produce as much electricity as storm clouds.

We have known for a long time that bees carry an electrical charge.

Ellard Hunting is a biologist at the University of Bristol in England and studies how different organisms use these electric fields in the environment. Plants and pollen are negatively charged and bees are positively charged. A bee visits a flower and the pollen is actually electrostatically attracted to the bee and therefore sticks better and is better transferred.

There are several bee hives used for research at the field station at the University of Bristol’s School of Veterinary Science. These bees sometimes swarm, and that’s when the researchers were able to directly measure them using an electric field monitor.

Bees can also electrically sense if a flower has been visited by another bee that has already taken its nectar. But until now, it was not thought that living organisms flying through the atmosphere could make an impact with their payloads. A bee’s load is negligible: it takes many bees to produce enough electricity to have an effect.

Imagine you need a billion to light up an LED. Fifty million bees to charge enough to start a car. But overall, because there are so many insects in the atmosphere, they can have a wide-ranging effect. This means that Bees and other large groups of insects can alter the atmospheric electric fields around them, potentially influencing things like weather events, cloud formation, and dust dispersion..

Insects are not the only living things that spend time in the atmosphere. Birds and microorganisms also carry cargo and occupy the lower atmosphere. Even before measuring bees, we knew the sky was full of lightning. These static electric fields are found everywhere in the Earth’s atmosphere. And they can be affected by rain, lighting, aerosols, pollution, volcanoes, and possibly earthquakes.

Atmospheric electricity is measured as something called the vertical potential gradient, or PG, which is the voltage difference between the Earth’s surface and any point in the air. The team found that swarms of bees can change the PG by 100 to 1000 V/m.

They also modeled how atmospheric electricity might be affected by other insects, such as grasshoppers, which can form swarms of up to 460 square miles. These swarms are dense enough to pack 40 million to 80 million insects in less than half a square mile. Based on previous measurements, the electrical charges of the locusts are higher than those of the electrical storms. Not all insects pack such an electric punch. In the modelling, the propellers do not seem to have much effect due to the low density.

Currently, insect electrical charges are not considered in climate models that deal with complex interactions in the atmosphere. They probably should: the combined electrical charge of all these insects may affect the development of rain, snow, and droplet formation, and perhaps even how clouds form.

We can only speculate, but it may affect cloud formation. Insect electricity can also affect how dust moves through the atmosphere. This is something atmospheric scientists are interested in because such dust blocks incoming sunlight and can change the temperature distribution locally.

The connection between dust and insects is very interesting because one of the questions about climate change is, “How do large particles move from the desert?” And we just thought about the physics of transporting them from the desert. What if they are stuck on the propeller because they are charged? It really changes everything, and we can think about it very differently.

After learning how much spark these insects can create together, it might be time to consider all that extra buzz in the air.